A Quick Guide to Tromso, Norway 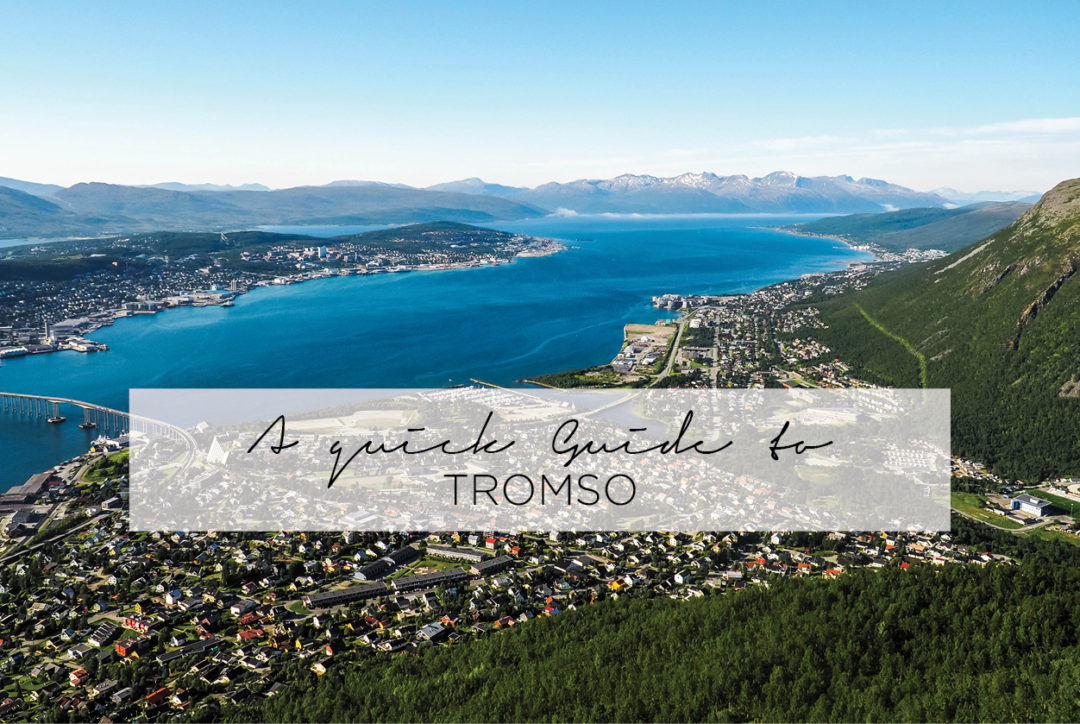 If you told me five years ago I’d be standing in the Arctic Circle, with a bunch of mates watching the midnight sun rise at 1am, I’d have looked at you perplexed. It wasn’t a location at the top of my list, not because I wasn’t interested in it – but because I just hadn’t heard that much about it. All that changed when one of my husband’s best mates met a Norwegian girl, fell in love and decided to get married there. All of a sudden excitement started brewing about an adventure to Norway.

We set about planning the trip, and decided that if we were to travel to the other side of the earth we might as well make the most of it. So we did. Over the span of almost a month we flew from Sydney to Oslo to Tromso, then bused from Tromso to Sommaroy (for what was the best wedding everrr), and then back to Oslo before flying to Dubrovnik, Santorini, Mykonos, Athens, and Home. But this chapter is all about Norway; exceptional, beautiful, magical Norway. And Part One is what to do in TROMSO.

WHAT TO DO IN TROMSO

We flew into the most spectacular day in Tromso and stayed at the Smart Hotel, which was possibly the smallest room I’ve ever stayed in (outside of an airport room in Japan) but otherwise in a great location in town, super clean, super trendy, and super affordable. It’s a great city (albeit expensive), and here’s 5 things you should do while you’re there…

From the centre of town it’s only a short (and picturesque) walk to the Tromso Bridge. You’ll get an amazing view over the water and the path will lead you directly to the The Arctic Cathedral, which even if you’re not religious is a pretty spectacular piece of architecture. And, from the Cathedral side it’s just a short walk to the cable car. 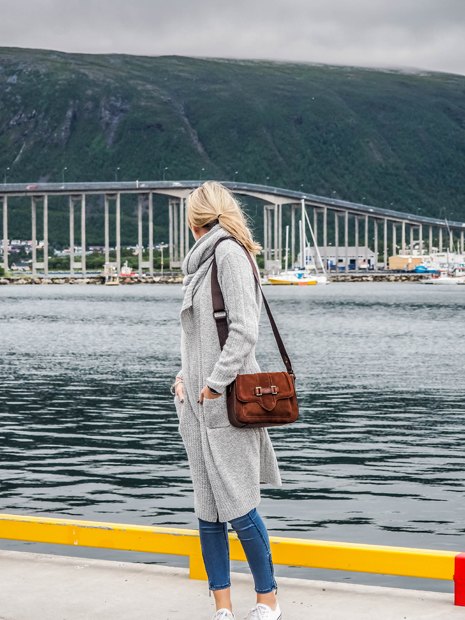 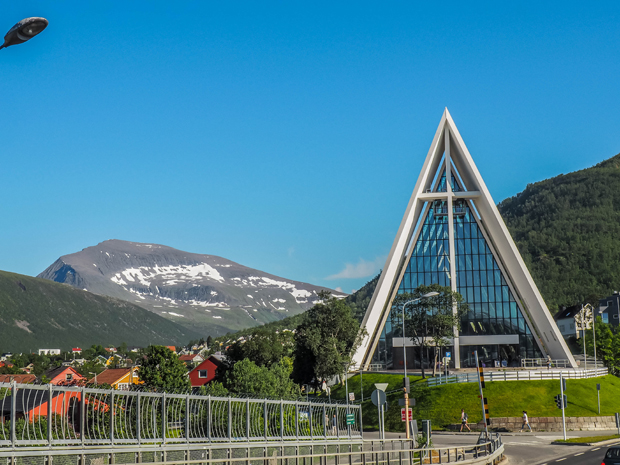 Take a ride up the Fjellheisen (Cable Car)

Standing atop a snow capped mountain is pretty epic. We were blessed with what was apparently one of the most beautiful days of the season, and so we took the opportunity to head 420m above sea level and check out the view from the top! Believe me, the view is worth seeing. And you can’t miss the rock stacks, they’re everywhere up there and really cool – needless to say we made our own rock stack too. When you’re done up there you simply catch the cable car back down & then it’s an easy walk back over the bridge to town. Otherwise if you’re feeling tired/jetlagged and would rather take the bus (like we did) there’s a public bus-stop at the base of the cable car and you can purchase tickets on the bus – or from the Tourist Centre before you start your walk. 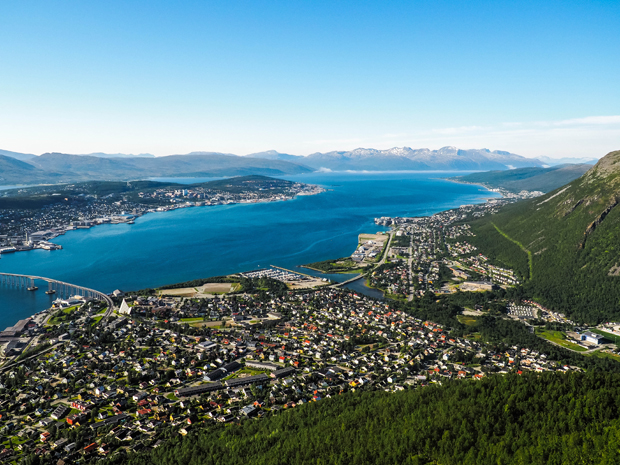 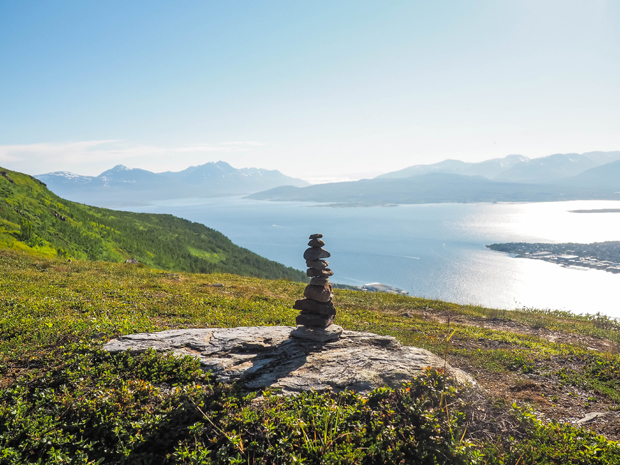 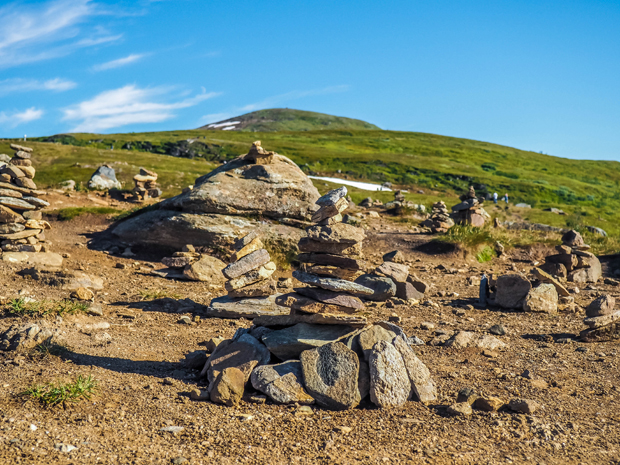 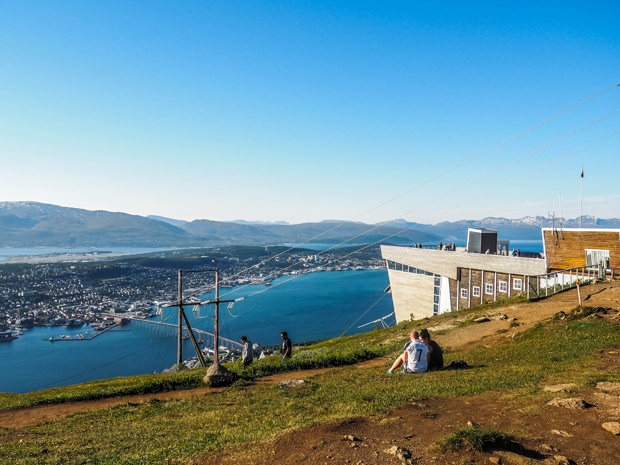 Norway is expensive, with a beer costing anywhere from $10-20AUD on the NOK/AUD conversion, and wine isn’t any cheaper. So, if you’re going to eat & drink…make it worthwhile right!? Visit Olhallen; the oldest pub in Tromso for a choice of 67 beers on tap. Rorbua Pub (next to the Radisson Blu) is also a cool traditional pub, and Scarven Pub/Restaurant is also a great spot for a beer in the sun and a view of the water, and for pizza, we loved Pinocchio’s. Unfortunately we only had a few of nights in Tromso and couldn’t fit everything in but other recommendations we had been given was ‘cocktails at Verdensteateret which is an old cinema turned into a bar’, and ‘Tromso Skybar for a cocktail on the roof of the Edge Hotel’. We were also treated to Reindeer as the main meal at our Friend’s wedding at The Arctic Hotel in Sommaroy, but noticed it on many menus around Tromso, so if you get the opportunity make sure you try it at some stage while you’re in Norway! 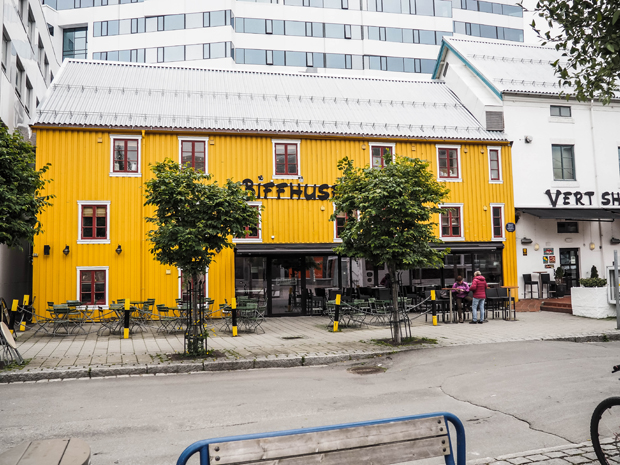 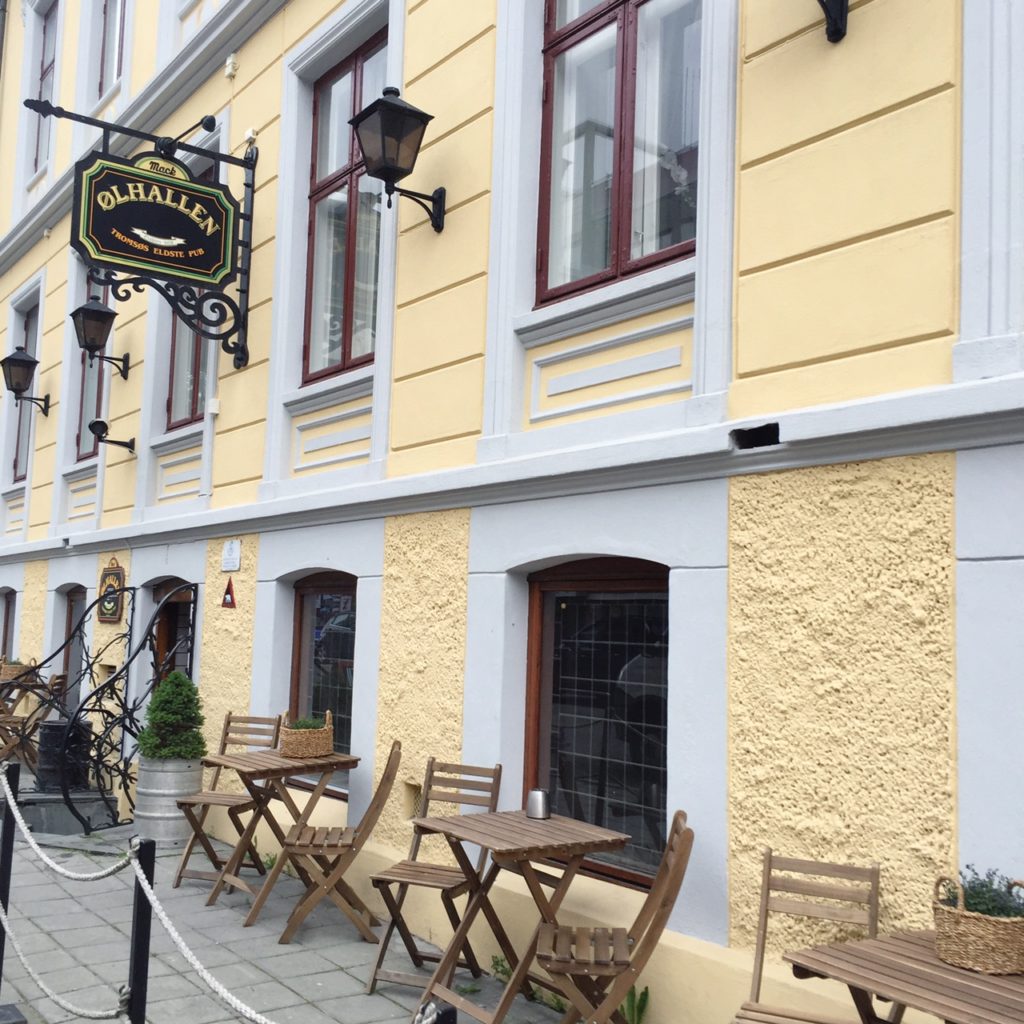 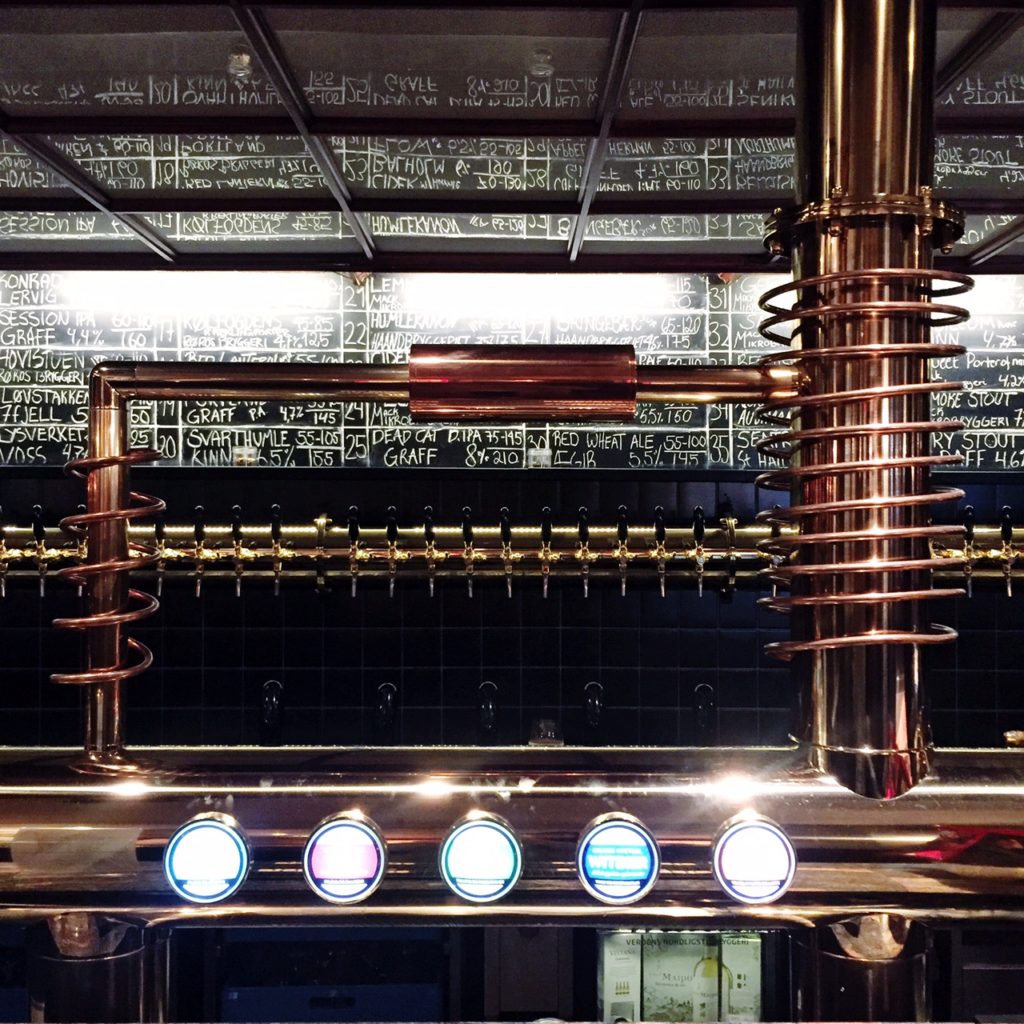 If you’re up for it, hire push bikes to explore town. It’s a really gorgeous place with all it’s colour and personality, so take the time to enjoy it! We rode from the centre of town out to Polaria Aqurium (to see the seals!), and then all the way around the coast to a beautiful park area called Folkeparken, and then up to Lake Prestvannet. I say UP to the lake because we failed to recognise from the map that we had to ride uphill for what seemed like an eternity in order to reach the lake which, given the energy expensed on the journey, was somewhat underwhelming lol. So, my recommendation is to hire a bike, skip the lake, see the town, explore as much as you can and most importantly… get the helmet. It’s not compulsory so being typical Aussies we said ‘pft, we’ll be right’ and ended up having two stacks between the four of us. A 50% topple rate lol. Get the helmet. We hired from Tromso Outdoor. 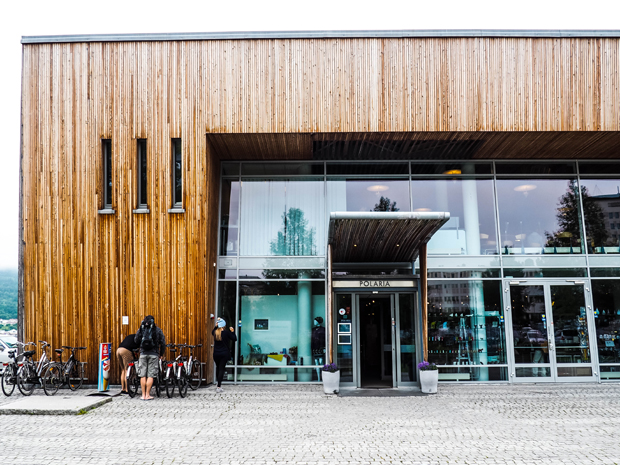 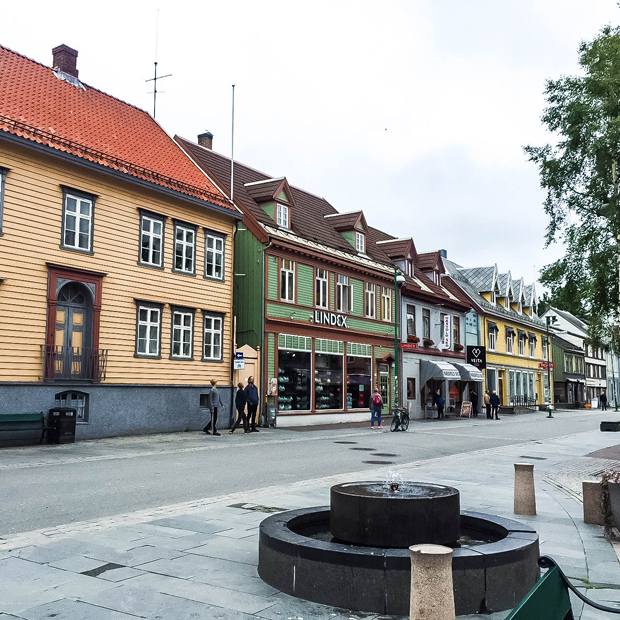 My Norwegian friend & bride-to-be had been super organised & kind to offer guests travelling to the wedding a full list of things to do, and places to go in Tromso. On the list it said “For the best coffee in Tromso go to Kaffebonna”. I didn’t realise how valuable this piece of information was until I had a couple of coffees elsewhere and began to immediately appreciate Sydney coffee (no offence Tromso!). If you’re craving a good coffee, you must go to Kaffebonna. 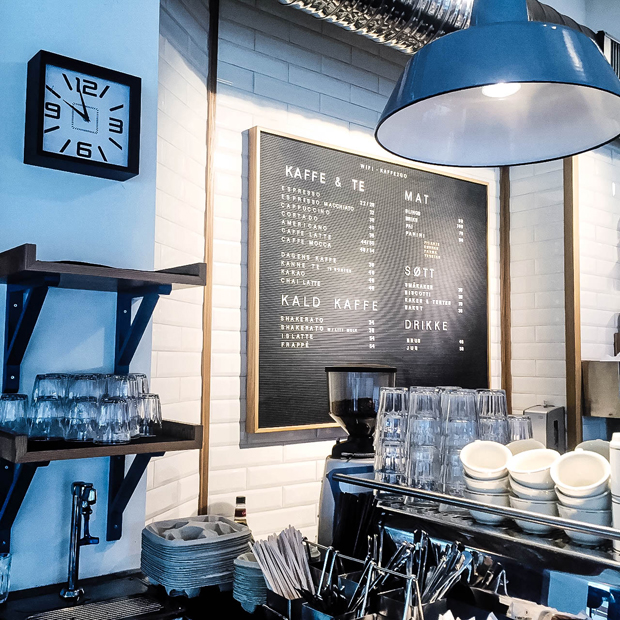 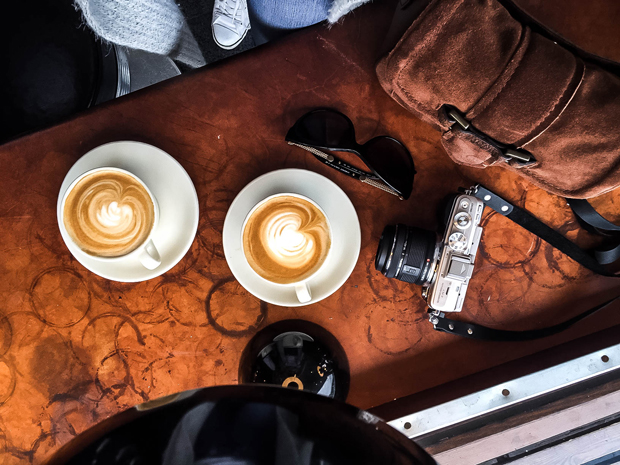 There’s loads of other things to do too, and loads of time to do it… since the sun doesn’t set during summer! So as a final note on what to do in Tromso; if you want maps, directions, recommendations or any other information about Tromso, or day trips out of the town, visit the Tourist Centre. They were a great help and have loads of information to offer. They are located in the town centre and their assistance is free.

Hope this little guide on what to do in Tromso was handy! If you have any questions pop them in the comments! 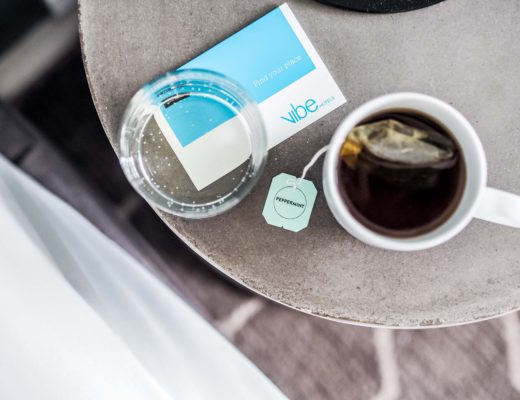 A Sydney Staycay with Vibe Hotels 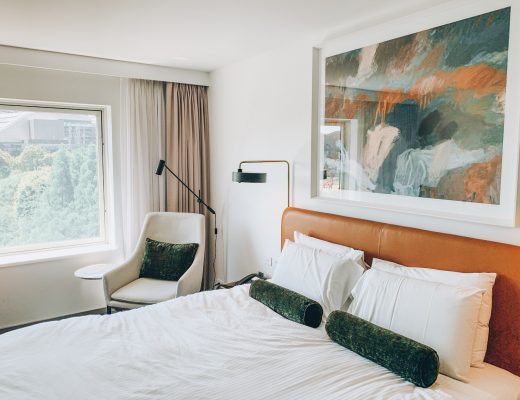 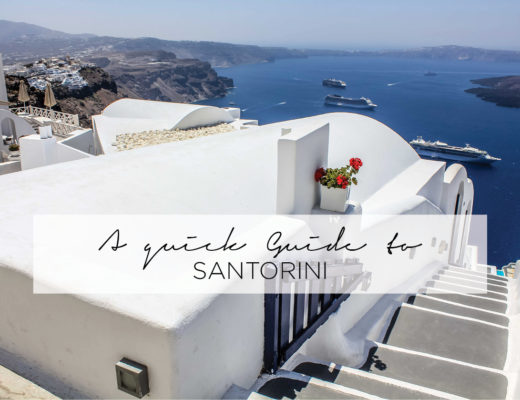 A Quick Guide to Santorini, Greece